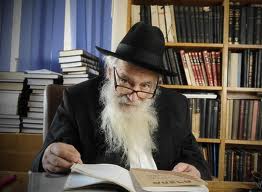 Rabbi Avigdor Nebenzahl (born 1935) is the former chief rabbi of the Old City of Jerusalem after handing over the post to his son Rabbi Chizkiyahu Nebenzahl who also learns in Yeshivat Netiv Aryeh, Rabbi of the Ramban Synagogue, a posek and a noted author of weekly essays on the torah portion.He is also the senior rosh yeshiva at Yeshivat Netiv Aryeh and is on the staff of Yeshivat HaKotel. He has authored a commentary on the Mishnah Berurah in addition to writing his own books on Passover, Succot, Shavuot, and The Three Weeks and most recently on Shabbat which includes laws and novel interpretations to the tractate Shabbat.

Rav Nebenzahl is considered by many to be one of the foremost talmidim of Rabbi Shlomo Zalman Auerbach having learned with him for over 40 years as a study partner. Rav Nebenzahl is also a former faculty member of Yeshivat Mir having married the daughter of former mashgiach Rabbi Chaim Zev Finkel. He is a brother-in-law of its current mashgiach Rabbi Aaron Chodosh, and of Rabbi Aryeh Finkel, rosh yeshiva of Mir-Brachfeld. (Bio adapted from Wikipedia)